Release BadgeMaker 2.10 brings an updated User Interface for BadgeMaker Identity, offering an efficient new quick menu and improved look for the card designs overview in your project. With the 2.10 release also comes the support for the Dascom DC-7600 printer, Oracle service names, the Data Card XPS Luster ribbons, the needed fixes and some nice improvements. 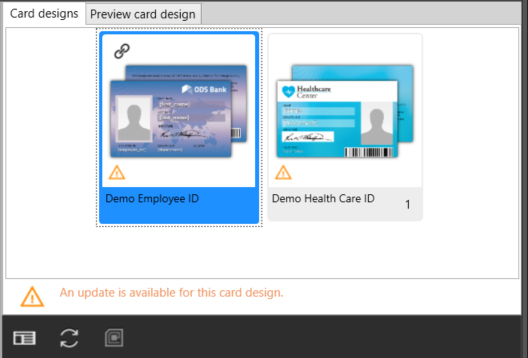 The “Card designs” tab shows an overview of the designs added and/or linked to your project. The new link icon allows you to link one or more selected records to this card design. It is also possible to unlink records with the unlink icon in the top right corner of the selected card design. Select a record and click on the “Preview card design” tab to see a preview of the card design linked to the record.

The warning icon lets you know an action is needed for this card design. Click on the card design to see which actions are needed. An action can be that an update is available for the design for example.

Update a card design using the update icon in the quick menu.

With the encode icon you can quickly navigate to the encode settings of the selected card. If a card design does not have encoding, the icon will be greyed out.

It allows the operator to present a new or unencoded card to an external card reader, do a quick search, select a record and encode the needed information directly to the card. Presenting a card that has previously been encoded will automatically select the corresponding record and gives the operator the option to update the card with the latest information or wipe the card if so desired. 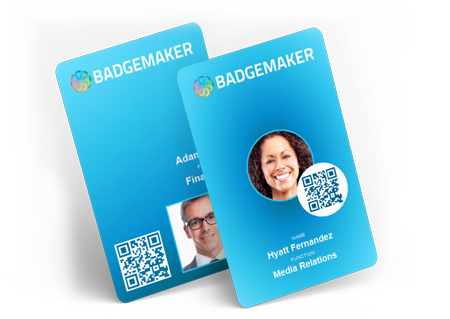 Next to the stand-alone encoding we made the Italian language available for BadgeMaker users and added the option to create multi-color radial and linear gradients in BadgeMaker Design. 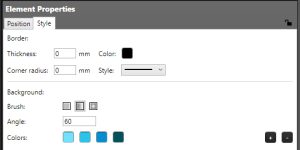 To create a gradient background color, click on a specific element, for example a shape-element created for the background of the card design and go to the “Style” Tab in the Element properties. Select if you would like a linear or radial gradient, the angle of the gradient and add multiple colors with the “+” button.

With the 2.9 release also come the needed fixes and some nice improvements for the user interface. Adding card designs to your project shows a better preview for example.

Fixes
* Fixed a problem with webcam capturing not working on certain systems.
* Fixed that constant values in triggers weren’t validated.
* Fixed that HF readers in ZC printers were not resolved correctly, preventing encoding.
* Fixed that UHF encoding would be skipped for CCIs that only contained data for the EPC bank.
* Fixed that JPEG EXIF orientation meta-data was being ignored.
* Fixed a rare licensing check issue, where license keys were erroneously seen as disabled.
* Fixed a BCD encoding problem for UHF chip configurations.
* Fixed an error that occurred with certain Oracle databases (ORA-64219: invalid LOB locator encountered).
* Fixed that the installer didn’t run the Elatec driver installer when enabled.
* Fixed several rare crashes based on telemetry crash reports.
* Fixed that Codabar patterns for B and C were swapped, and that the + pattern was incorrect.
* Fixed that date formats didn’t have an effect in Mifare Classic CCIs.
* Fixed a rare IDP Solid print failure when printing colored text. 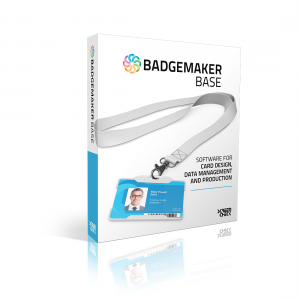 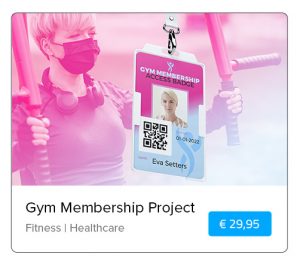 ScreenCheck is excited to inform you about the release of BadgeMaker 2.7 ID Card Software with improvements, fixes and a great new feature in BadgeMaker Design, called the “Store”. The Store offers a selection of free Card Design templates to select and download; in the future the store will expand. 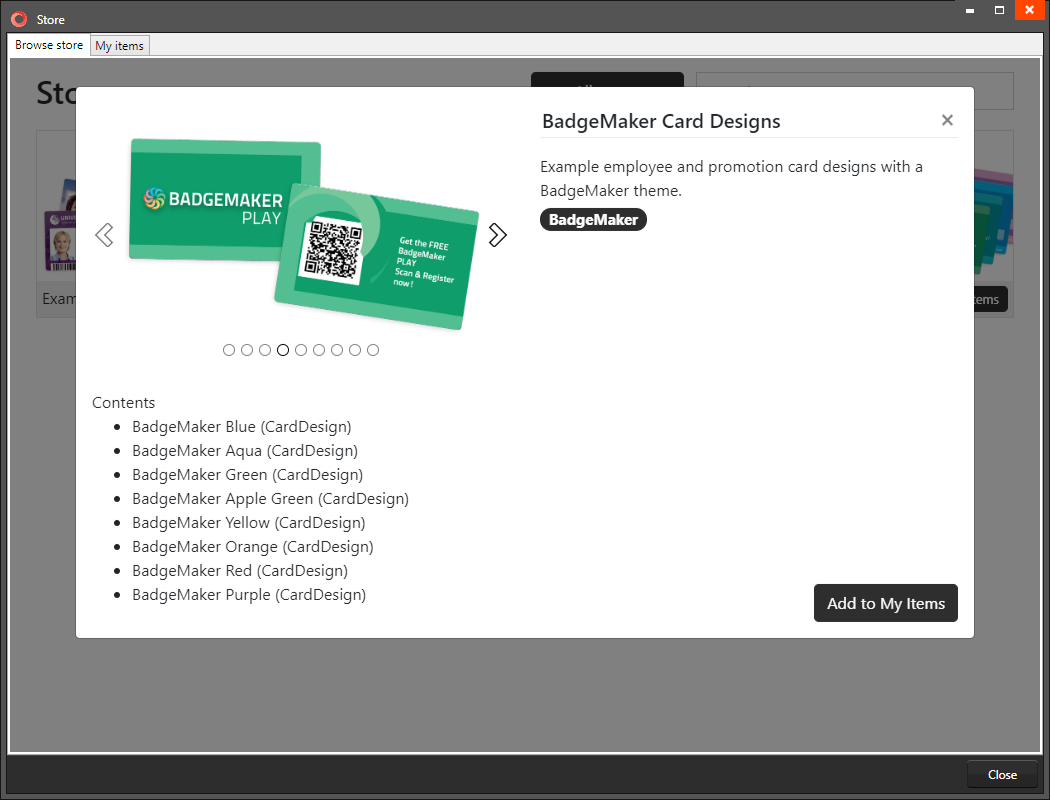 Start BadgeMaker Design 2.7 to access our new feature called the “Store“. The Store is a new option in the main menu that opens an online store within the software. BadgeMaker 2.7 lets you shop for a selection of free Card Design template bundles.

The main changes for BadgeMaker 2.7 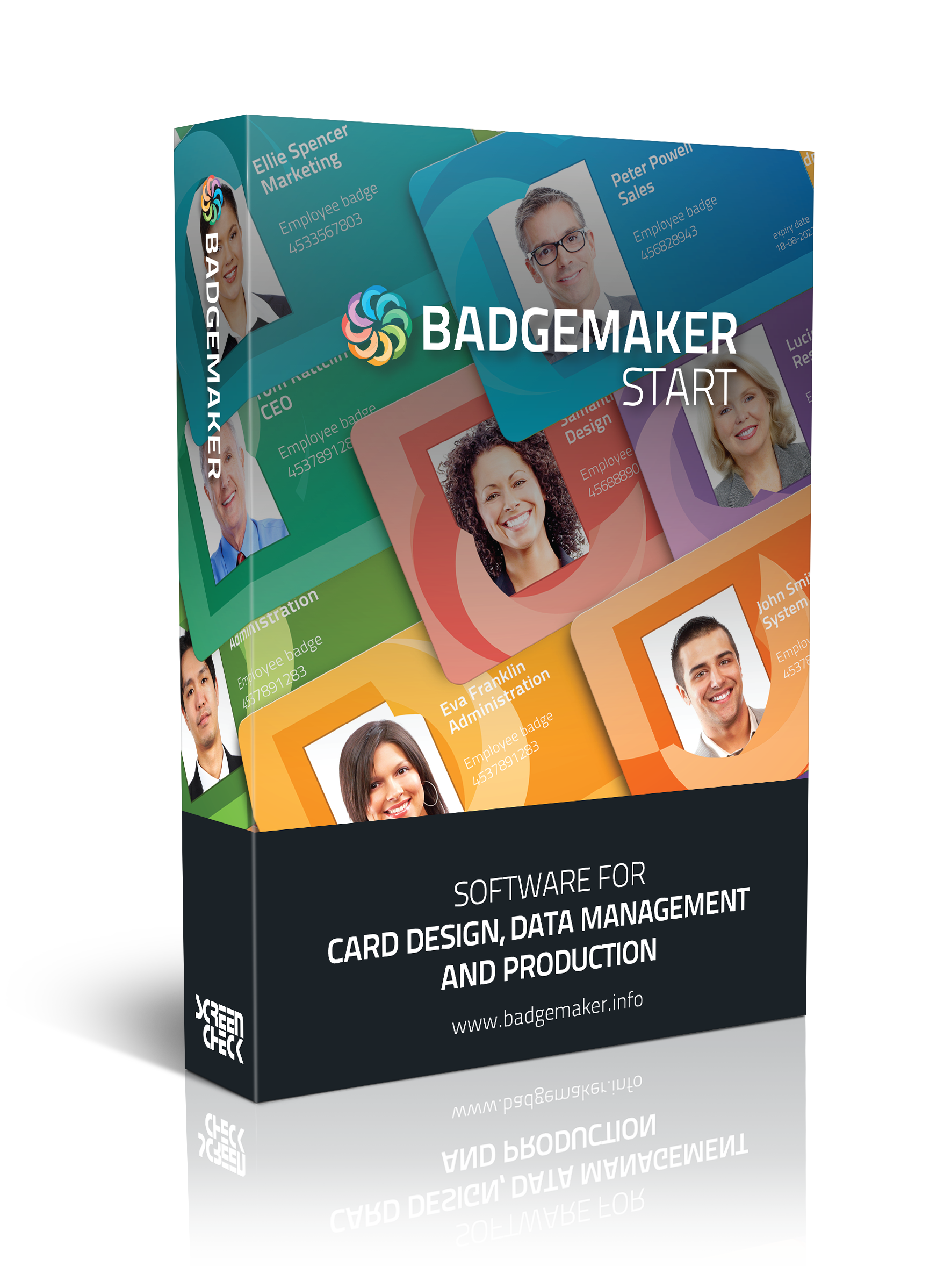 ScreenCheck is dedicated to support you in getting the most out of our products. Please contact us if you have any questions about this release.

Improvements for BadgeMaker Identity
The data import process can now be canceled.

Fixes for BadgeMaker Identity
Fixed that BadgeMaker demo license information was not displayed correctly.
Fixed an issue where all text for a specific font was rendered bold.
Fixed temporary fonts not being deleted correctly.
Fixed that card designs where not updatable in BadgeMaker Share.
Fixed an error with card designs that do not contain any fonts.
Fixed undo/redo behavior when adding biometric images.
Fixed a bug where quick print would not work with a newly connected printer.

New features for BadgeMaker Design
Added an online Store where a selection of card design templates can be downloaded and used.

Improvements for BadgeMaker Design
You can now enter text immediately in the text element on the canvas after creating the new text element.
Copy and pasting elements to another layer will now keep its position correctly.

ScreenCheck would like to inform you about the BadgeMaker 2.6.5 release. Compared to BadgeMaker version 2.6, version 2.6.5 offers a number of bug fixes, improvements and a few small features.

ScreenCheck is dedicated to support you in getting the most out of our products, in sales, marketing and support. Please contact us if you have any questions about the upcoming release BadgeMaker 2.6.5. 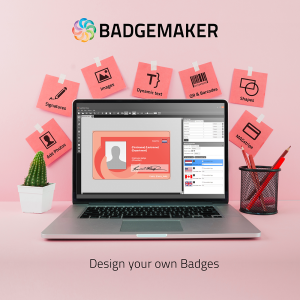 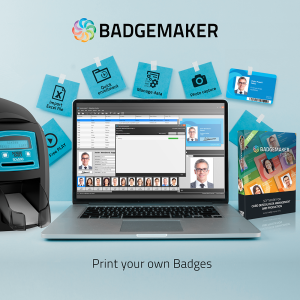 BadgeMaker release 2.5 – All about improvements

BadgeMaker 2.5 is all about improvements that make your experience even better. Improvement of the user experience for example, such as automatically opening your most recent project or being able to define specialty layers in your card designs. Because of the new BadgeMaker improvement program and the feedback we receive from our partners and customers, BadgeMaker is set to improve with every new update.

Added support for Desfire key diversification
Added support for Desfire UID randomization and disallowing card formatting
Added support for date fields
Added undo/redo menu buttons
More control over Desfire overwrite behavior
Padding byte values can now be adjusted
Dynamic fields can now have a fallback value, which will be used if the dynamic data is empty
CPM ‘plugin’ data is no longer removed when saving a CCI
Fixed that some Desfire ISO file IDs were incorrectly displayed as invalid

This month BadgeMaker Share Summer Special with a chance to win and special offers!

Happy to introduce the new BadgeMaker Share Add-On at the beginning of this year. To put the new Share Add-On into the sunlight we offer a Share Summer Special this month. Follow us to be up to date with our special. Get the chance to win and see our other offers.

Register here to try out BadgeMaker 2.0 for free!

Work together on the same project at the same time!

BadgeMaker 2.0.16 lets you view, import, manage, connect, encode and now also share your BadgeMaker projects. With the BadgeMaker Share Add-On projects are made available for collaborating securely across your organisation.
ScreenCheck is pleased to announce several updates that help with some of the most common card production tasks, including automatic card design assignment using external columns, migration updates so old projects like IDPro 7 and BadgeMaker “Classic” can be imported into BadgeMaker 2.0, print improvements for supported card printers like Magicard and an update in the filter and search feature.

Try out the new update
Try out these new features and see how they can help you do more with BadgeMaker! Do you have ideas on other features and improvements that you’d like to see in BadgeMaker? Contact us and let us know what you think!